Both individuals and companies that work with huge volumes of documents recognize that comparing their content is a rather monotonous and meticulous task.

Intellexer Document Comparator is basically a tool that accurately compares text or URLs on two levels: lexical and conceptual, and sets a degree of similarity between them. What’s more, it can spot differences in the texts.

The tool extracts named entities and concepts, groups them into different categories: “Location”, “Person”, “Organization”, and many more. Then it compares them and decides which ones occur in both texts and which ones differ. 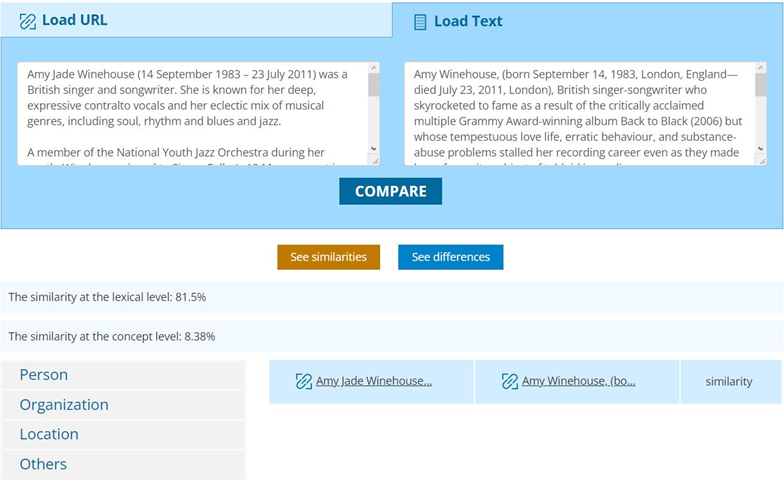 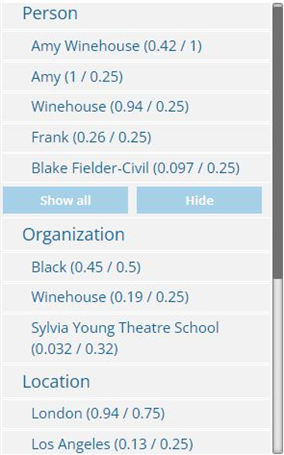 A user provides two links or two texts. Intellexer Comparator analyzes the input info and converts it into a vector form. In this new representation, specific words and phrases (initially used as the termbase for the documents) acquire a generalized structure and meaning. Weights are assigned to the meanings of the words (e.g. the weight of the subject is more than that of a simple noun group). As a result, the processing of information takes place at the level of the possible meanings of each word and at the level of the ideas that each sentence and the context, in general, may express.

Intellexer Comparator is a handy tool that collates two texts and determines the degree of proximity between the ideas they express. The proximity is indicated within the range of 0-100%, where “0” means "absolutely different texts" and “100” means "the same text". 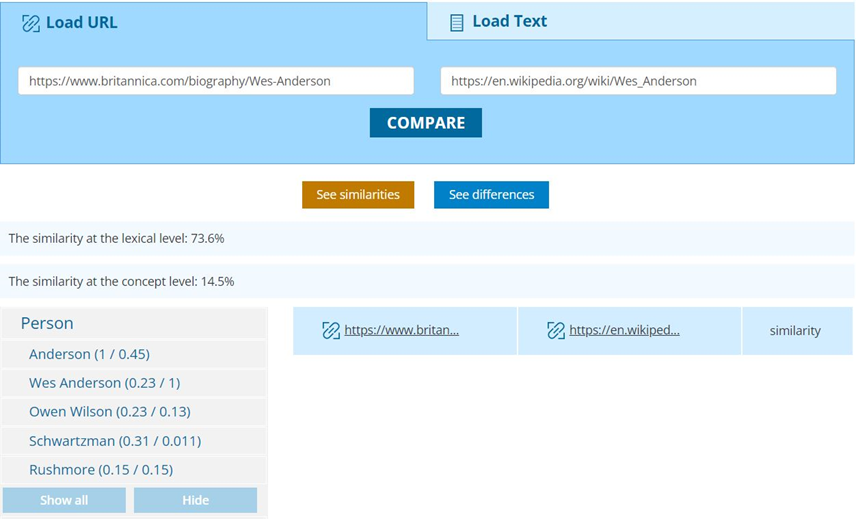 You can get Intellexer Comparator in three different ways suitable for your unique needs: Demo (to get a taste of the system’s capabilities), SDK, and API.

There are many other programs on the market dealing with text comparison (WinMerge, SmartSynchronize, Meld, and others). In contrast, Intellexer Comparator has a number of useful advantages.

We have a ton of exciting updates planned that you’ll definitely like. We’ll make our products even more intelligent and rich in functionality. Check back soon!

Back to Blog Main Page

Application based on Intellexer API that performs:

Download x86 (32 bit)
Download x64 (64 bit)
Note: After installation use your private API key to register the software. Number of requests per month and maximum size of the documents depend on your API key permissions.